What You Should Do After You Get a DUI 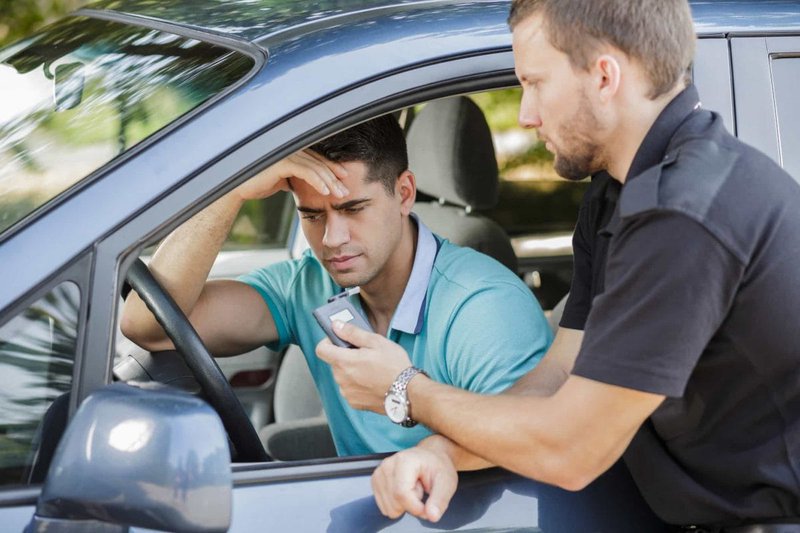 It’s 5pm on Friday and you’re ready to unwind, so you head to a bar near your office for a burger and beers with co-workers. A couple of hours and a couple of drinks later, you get in the car to make the short drive home. That’s when you see the police lights flashing in your rearview mirror – and the moment you realize you could be in trouble.

Even in a best case scenario, when no one gets hurt, driving under the influence is a serious crime. Once you are pulled over and asked to take a breathalyzer test or you fail a field sobriety test, you will be arrested and booked on suspicion of DUI. As you sit in the back of the police car, a million thoughts race through your mind: “What happens now?” “Will I lose my license?” “Is a DUI a felony?” “Do I need a lawyer?” It’s normal to be fearful or worried about the outcome of such a serious situation, but knowing what to do immediately after a DUI will help you make the right decisions.

Document everything you remember

The moment you have access to a pen and paper, write down everything you remember from your DUI stop. You’re probably shaken up about the experience, and the details of your arrest will quickly fade from memory. Where and when were you stopped? What did the officer say when you rolled down your window? What did you tell the officer about what you ate or drank that evening? What types of tests were administered? Keep this information private between you and your lawyer.

When you’re arrested for a DUI, maintain your right to remain silent. If you’re pressed for information, tell the law enforcement officers you are exercising your Fifth Amendment right and that you would like your lawyer to be present before speaking to them. Your first phone call after you get a DUI should be to a San Diego DUI defense lawyer. An attorney experienced in criminal defense cases, like Elliott Kanter, will offer a free consultation to get an understanding of your situation, provide legal advice, and handle every aspect of your case.

After a DUI, you’ll want to privatize your social media profiles for the same reason you should remain silent until your lawyer is present: anything you post online, whether it’s Facebook, Instagram, Twitter, or another public profile, can and will be used against you. Prosecutors look for incriminating photos or posts to use against DUI defendants, so it’s important to make your accounts private as soon as possible after you’re arrested.

Gather witnesses willing to testify on your behalf

While a good San Diego DUI defense lawyer will negotiate a favorable outcome for you without going to trial, it’s not a bad idea to gather a list of favorable witnesses who would be willing to testify in court. Ideally, this would be a passenger in your car that could vouch that you were sober, or co-workers who could verify that you had stopped drinking long before you got behind the wheel.

Were you arrested for driving under the influence? Call a San Diego DUI defense lawyer now.

Driving under the influence is a serious crime, but the good news is that a DUI is generally classified as a misdemeanor in California. You will be charged with a
misdemeanor unless your DUI caused a car accident that severely injured another person, you’ve had four or more DUI convictions within the last 10 years, or you have a prior felony DUI conviction. 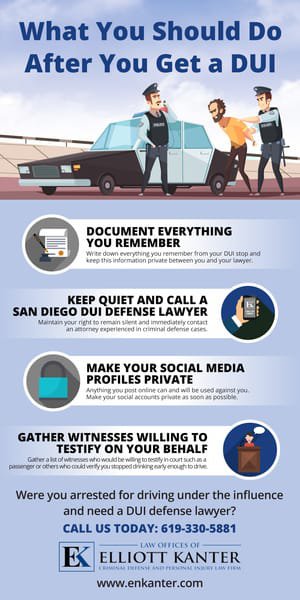 If your DUI does involve one of these circumstances, you’ll need a felony DUI attorney to fight aggressively on your behalf.

Elliott Kanter has more than 30 years of legal experience handling all aspects of DUI cases and a strong track record of negotiating the best possible outcome for his clients. Whether you’ve been charged with a misdemeanor or felony for driving under the influence, you’ll need the best San Diego DUI defense lawyer to defend your rights. Call us today.